Why Does The Pig Dig For The Truffle? Fun facts about one of the most expensive foods in the world!

Contrary to belief, truffles are not mushrooms.  They are fungi and grow underground.  There are several varieties, both black and white, but the white ones will be our focus today. 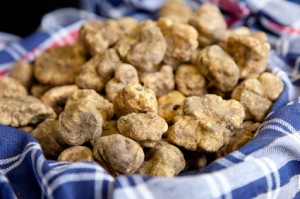 The white truffle – one of the most expensive foods in the world!

Alba white truffles come to us from northern Italy and are available just a few months out of each year.  Italian white truffles are quite expensive – reaching upwards of $9,000 per pound – yes, you read correctly – a direct result of their increasing rarity in that particular region of Italy.

Special truffle sniffing pigs, with an innate sense of smell for the delicacies, were at one time, exclusively used to find them, and they still are, in certain parts of the world.

So what makes a female pig go so crazy over truffles?

The musky aroma is similar to that of a potential mate’s pheromone, so strong and recognizable to the snout, that even though buried deep inside the ground, the pigs still manage to find them.  The smell to the pig, in essence, leads to a male and . . .  well, you get the idea, so in order to prevent the eager pigs from devouring the culinary prizes, they must be kept on strong rope leashes so that the trifolau (or truffle hunter) can take over and carefully harvest them before they are damaged or eaten.

Pigs, for the most part, have now been replaced with trained truffle dogs.  Unlike their truffle sniffing counterparts, dogs are not as inclined to eat their find.

In the US, white truffles are found in the wild in Oregon.  There are two methods of finding the prized delicacies – first, by using trained truffle dogs to locate them or second, by gently raking around the base of fir trees until the truffles become visible.  The latter method is a bit risky as the truffle hunter may cause damage to the harvest.

Oregon whites have gained in popularity and are now fully recognized in the culinary world as being almost, if not entirely, equal in taste to their Italian counterparts.  Even though far less expensive than their European mates, the Oregonian truffles still reach into the thousands of dollars per pound, and it is projected that if Oregon keeps up its current truffle rate, the industry is on course to bring in billions in truffle revenue to the state.  Hmm . . . in my next lifetime, I think I’d like to be a truffiere.

So what’s all the fuss about?

Truffles don’t hold up well under heat, can’t be stored for long periods of time, and are quite pricey.  Just like anything else, it seems their rarity makes them a treasure of sorts and just like anything else, something with a story, an interesting history, such as the manner in which they are found is always appealing.  But believe it or not, it is their prized fragrance that is so irresistible.  When combined with oil or eggs, the products take on the strong, enticing, garlicky aroma, filling the senses with an unmistakable, enticing perfume.  Yes, it mostly comes down to aroma . . . so much so, that it is often said that to humans, truffles are much an aphrodisiac as to the relentless pigs that pursue them.

And that is indeed . . . something to snort about.