After hearing so much about the prime rib here, I decided to try the North Myrtle Beach restaurant of legendary golfer, Greg Norman. Nestled along the intracoastal waterway, the view is relaxing and the restaurant itself is a bit more upscale than most places in these parts.

As I waited by the “Please Wait to be Seated” sign, I heard a callout from my right from someone asking if I needed help. I replied that I’d like to have brunch. One of the two young ladies, seated behind a partition, made her way over, greeted me warmly, and promptly led me to a seat outside. Moments later, my waiter, Zander, appeared and upon accepting my order, was sad to impart the bad news that there was no prime rib. Given that it had run out on Saturday evening, it appears that the message never made its way to the easel outside the front door that was proudly touting “40% off prime rib on Sundays” in red letters, as it greeted its patrons before they entered the premises. A bit disappointed, but realizing that these things happen, I decided to move on. I opted for Caesar salad and lobster ravioli, a dish I hadn’t had in a number of years.

The Caesar salad was quickly served. It arrived with crunchy slices of lettuce (rather than the traditional method of longer, leafier romaine stalks), generous slivers of parmesan cheese, fresh and crispy croutons. The dressing, however, was a bit tart. Caesar is my favorite salad so it’s a dressing that I know well. I also know how tricky it is to get it right – the right balance of anchovies, lemon, egg, oil, and mustard.

Next came the lobster ravioli – beautiful, swimming in a creamy pinkish red sauce, large ravioli generously stuffed, with a few bonus shrimp to top it off. One bite and I was in heaven. It was dreamy, decadent, and perfect for a mildly cool March day. I thought I may have tasted a slight hint of Sherry or Madeira, but this was not confirmed. 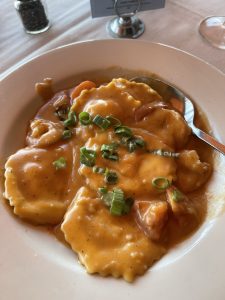 My waiter, Zander, was wonderful – attentive, looked you straight in the eye when talking, confident, and a great ambassador for the restaurant. He likes it here, he likes the food here, and proudly proclaims that. (The young female server next to me was just as professional and attentive to her diners.) Zander was kind enough to bring out some tasty, hot, bread with just the right amount of crunch. All it was lacking was a tad pinch more salt, but that’s always been a personal preference of mine. I find that most bread is lacking that salty kick. My used knife had disappeared with the salad plate and salad fork and was never replenished, so I found myself dunking the bread into the butter.

My water glass had long been empty and I was thirsting for a freshly brewed cappuccino, but Zander again had to deliver the news that the machine “is down for the moment.” Oh well, there are worse things in life, right? Right! The sweetener for my Irish coffee never arrived, so he was kind enough to remove the now chilly beverage from my tab. I could tell that he was most likely serving patrons in several different locations of the restaurant. Been there, done that, and I always give the benefit to the waitstaff – always!

Zander suggested the peanut butter cheesecake. It was generous in size with just the right balance of peanut butter to the remainder of pie filling. I would have preferred a tad bit sweeter, but it was savory and I found it difficult to stop at a couple of bites. 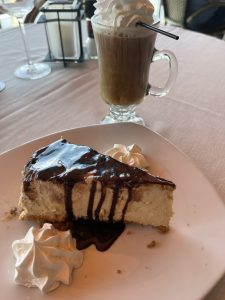 All in all, it was nice to see a friendly, attentive staff working and delivering well, despite the staffing and turnover struggles most restaurants are still facing due to pandemic worker shortages. I’ll come back next time for that prime rib and that cappuccino . . . hopefully!

Serving/Greeting Etiquette: 8 (knife not replenished, no sweetener for coffee, water glass not refilled, prime rib listed as an offering outside, but not available)
I think this is generous and I did take into account current staffing conditions everywhere. In another season, with the pandemic long behind us, I would hope that basics such as these would be a no-brainer.